Benjamin Barton on The Lawyer-Judge Bias

First, thanks to TOTM for organizing this symposium on a most timely and important topic.  As computers and technology have revolutionized every aspect of human endeavor it is a particularly critical time to ask ourselves why 21st century law schools closely resemble the law schools of the late-19th century and why in court litigation would seem relatively familiar to Clarence Darrow.  One significant answer is the regulation of the legal profession, and one possible solution is significant deregulation. 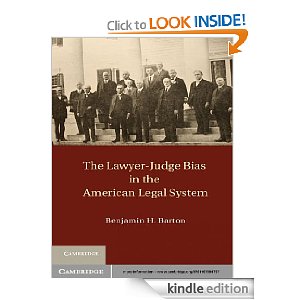 My particular interest in the topic is the role that the American judiciary has played in generating the remarkably lawyer-friendly regulations that govern the practice of law.  (Self promotion alert!).  Cambridge University Press recently published my book entitled The Lawyer-Judge Bias in the American Courts.

The book starts with the relatively unremarkable observation that virtually all American judges are former lawyers. The book goes on to argue that these lawyer-judges instinctively favor the legal profession in their decisions and that this bias has far-reaching and deleterious effects on American law.  The book notes many reasons for this bias, some obvious and some subtle. Fundamentally, it occurs because – regardless of political affiliation, race, or gender – every American judge shares a single characteristic: a career as a lawyer. This shared background results in the lawyer-judge bias.

The legal profession, by contrast, is governed in all fifty states by state supreme courts.  These Courts frequently delegate the actual nuts and bolts of governing lawyers to bar associations or other administrative bodies.  Predictably, this regulatory structure favors the interests of the legal profession over those of the public.

Interestingly, it was not always thus.  During most of the nineteenth century, lawyers were largely unregulated and what regulation existed came from legislatures not courts.  There was almost no formal regulation of lawyer behavior and barriers to entry like a bar exam or the law school requirement were unheard of.  Bar associations were weak or non-existent.  Admittedly this period was pre-industrialization, but note that it is not unthinkable or impossible to have a deregulated market for lawyers; to the contrary, we’ve done it before.

In the late-nineteenth century bar associations began to reform.  Priority number one was lobbying courts to step up the regulation of the profession.  Over time state supreme courts have taken control of lawyer regulation and have created the complex web of regulations that now govern the legal profession.

Priority one for the new bar associations was to encourage state supreme courts to take over lawyer regulation and then to raise barriers to entry.  For example, from its inception the ABA pilloried what it considered to be the undesirable element in the bar and proposed a tightening of bar admission standards because low admissions standards had contributed to “extraordinary numbers” of the “ignorant” and “unprincipled” becoming lawyers.  See 2 A.B.A. Rep. 212 (1878).  In 1891, the ABA Committee on Legal Education produced a 60-page report on entry to the profession that proved incredibly prophetic.  The report recommended virtually every major innovation to come: including state supreme court control over entry, written bar exams, a three year requirement for law schools, and specific law library and facility requirements.  The report’s very first resolution was to “strongly recommend that the power of admitting members to the Bar, and the supervision of their professional conduct, be in each state lodged in the highest courts of the State.”

State supreme courts obliged by claiming an “inherent authority” to regulate the legal profession as an outgrowth of the constitutional separation of powers between the legislative and judicial branches.  State supreme courts used this “inherent authority” to seize entry regulation from the legislature, conduct sua sponte investigations of the unauthorized practice of law, and even to make many bar associations unified or mandatory.  In states with unified bars, a lawyer must be a member of and pay dues to the state bar association to practice law in that state.  Obviously, a mandatory bar association has significant benefits for the legal profession in those states.  In many of these states, the Supreme Courts ceded control over the profession to the unified bars, making lawyers in those states the most self-regulated professionals in the world.   Further, like a closed union shop, the mandatory collection of dues and the associated political clout of having all lawyers be members of the bar association are significant advantages to the profession.

I raise this history and the close interplay between the interests of judges and lawyers to note how difficult any deregulation effort will prove.  State supreme courts govern lawyer regulation in all fifty states.  There have been federal incursions by the SEC and others, but judges control the nuts and bolts of both entry and conduct.  Any large-scale changes to regulation will likely have to go through state supreme courts and if history is any guide those courts will naturally (and frequently unconsciously) care more about the needs and desires of bar associations and the legal profession than the public at large.

Samuel Bowman
Many competition agencies are considering data portability mandates to increase competition. These would require companies to make customers’ data available to move to other services, or to make their services interoperable with others so that users could share their data between different services on an ongoing basis.
Data Security & Privacy